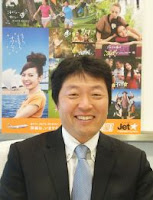 TOKYO —While many airlines are struggling amid the global recession, Australian low cost carrier Jetstar is soaring. A member of the Qantas group, Jetstar took off in 2004 with services to 14 destinations in Australia. It began its international operations to Asia in 2006, adding services to Japan in March 2007 with a Sydney-Osaka-Brisbane service.

Jetstar is on the move and last December commenced services to Narita from Cairns and the Gold Coast. It will expand its Gold Coast–Tokyo (Narita) two-class service from the current five times a week to a daily service from March 29. That means Jetstar will be offering 21 weekly return flights that includes existing Osaka-Gold Coast-Sydney and Cairns-Tokyo daily services.
The strong yen against the Aussie dollar is a big help, of course, and a successful advertising campaign featuring “talento” Becky has given the airline a high profile in Japan. Jetstar got another boost last November when it was named CAPA Low Cost Airline of the Year by the Centre for Asia Pacific Aviation.
On the Japan routes, Jetstar uses six Airbus A330-200s, configured for 265 economy seats and 38 StarClass seats. The airline offers a range of beverages for purchase and portable video-on-demand entertainment units for hire.
Heading up the airline’s operations in Japan is Masaru Kataoka, the regional general manager. Born in Kyoto, Kataoka majored in mechanical engineering at Shinshu University in Nagano. He joined Hitachi as a nuclear engineer, then switched to the airline industry. He worked for Singapore Airlines, Ansett and Air New Zealand before moving to Jetstar in 2006.
Based in Osaka, Kataoka makes regular visits to Tokyo where. Japan Today editor Chris Betros caught up with him recently.
Was it hard launching a low cost carrier in Japan?
It has been an exciting challenge, introducing a new concept to the leisure travel market.
What is the image of a low cost carrier in Japan?
It used to have a cheap image but as we have become better known among consumers, the brand image is changing to mean convenience, cheap but safe. A lot of consumers don’t know Jetstar is a company based in Australia. However, Qantas is well known in Japan because it has a 50-year history, so we have been able to use the name of Qantas to expand the brand awareness of Jetstar.
How are you marketing Jetstar?
In Kansai, we have been doing a sales and marketing campaign for more than two years, so our name is fairly well known there. For Tokyo, we announced the commencement of operations last July and since then, we have been promoting the name of Jetstar nationwide. In February of last year, we started a campaign using Becky and it has been very successful. She is very popular among all generations and projects a very bright, cheerful image for Australia.
What is your business model?
It is a simple point-to-point service. We don’t issue tickets. You pay for meals and entertainment on board or in advance. This is clearly mentioned when you book online or through our call centers. Tickets sold through travel agencies include meals and comfort packs.
What sales channels do you use?
Before we commenced operations, we had an initial budget to expand branding first, then establish sales channels, not just relying on existing channels such as travel agencies, but create our own sales channels. Online bookings and our call center account for 70% of bookings in Australia, while in Japan, it is about 25%. Many Japanese still prefer using travel agents because they are everywhere and take care of everything. They can give older customers much more information and options for holidays.
How many routes are you operating to and from Japan?
We have three routes from Japan—Kansai-Gold Coast, Narita-Gold Coast and Narita-Cairns. From March 29, Gold Coast-Narita will go from five weekly flights to a daily service. The Gold Coast service continues on to Sydney.
How were you able to get the extra slots at Narita airport? There always seems to be a waiting list.
We took over slots given up by Qantas which reduced its flights to Japan.
How are load factors?
The best load factor at the moment is on the daily Kansai–Gold Coast sector, then Narita-Cairns. Revenue generation is good, over our expectations. The Narita-Gold Coast route has a good mixture of passengers. Despite the strong yen, there is still a big demand in Australia to come here for skiing.
Any plans to expand your service to other cities in Japan?
Right now, we only have six aircraft on long haul sectors. When we take delivery of our new Boeing 787s, scheduled for early next year, we might review our network.
How many Japanese flight attendants do you have?
We have about 40 who are based in Sydney and Cairns.
What is a typical day for you?
I show up at the office about 8:30. First, I check emails to Australia, then I concentrate on our sales and marketing strategy. I’m in the office most of the day, though I do come to Tokyo a lot. I go to Melbourne 3-4 times a year.
How do you like to relax?
I like playing golf, and coaching my children’s softball team.
By Chris Betros
For more information, visit www.jetstar.com